"Bush did sit down with the premiere Olympic sportscaster of all time, Bob Costas, to discuss what he thought was so weird about the invasion [on screen: Bush saying he thought it was odd Russia invaded Georgia during a time when the world is promoting 'peace and harmony,' and that there needs to be 'international mediation there']. Yes. Sometimes international mediation can solve conflicts. That's President Bush winning the preliminary heat in the 200 meter lack of self-awareness dash [on screen: Bush saying America doesn't seem to have any problems]. I think that might be our biggest problem." --Jon Stewart

"You know, he really is adorable. He shouldn't be our president. He should be our mascot." --Jon Stewart, watching Bush at the Olympics

Privatizing the Military Sure Has Worked Out Well, Huh?

The United States is spending roughly one-fifth of funds for the war in Iraq on private contractors, according to a report issued by the Congressional Budget Office on Tuesday.

Forget Putin, Bush Has a New ‘Soul Mate’ in Medvedev

The Airlines Should Charge the Pentagon

Some airlines are charging U.S. soldiers extra baggage fees to take their military kits with them as they set off for war.

"It turns out the Chinese faked part of the opening ceremonies. They made the fireworks look more lively. It's the same technology they use for John McCain." --Craig Ferguson

Talk of Republican Sen. Chuck Hagel as a potential running mate for Democratic candidate Barack Obama tends to confound partisans in both parties.

John McCain has been accused of stealing policy ideas from Wikipedia, which is ridiculous! Everybody “knows McCain doesn’t know how to use the Internet, so how could you even accuse him of that? - Craig Ferguson

"John Edwards, presidential aspirant and author of the famed claim that there are two Americas, was apparently only faithful to his wife in one of them. Apparently he didn't realize that the National Enquirer had reporters stationed in the other America, where he was, in fact, banging his videographer." --Jon Stewart (Watch video clip)

The number 1 job in America: contractor in Iraq. Where do I sign up? - Grant Gerver

Former presidential candidate John Edwards knew his ex-mistress, Rielle Hunter, was receiving payments from his former campaign finance chairman, according to the National Enquirer, the publication that broke the story of Edwards' affair.

What's more, says the Enquirer, it has "uncovered that Edwards' political operatives are still paying" Hunter.

"According to rumors, John McCain and Barack Obama are trying to get Angelina Jolie’s endorsement for the campaign, and John Edwards is just trying to get her number." --Craig Ferguson 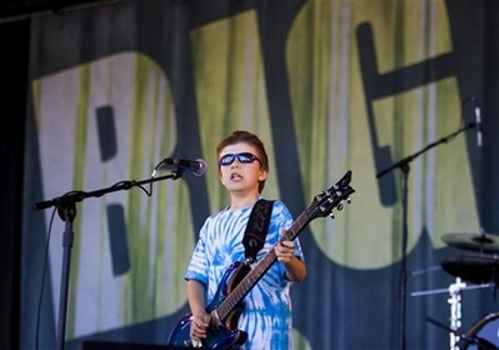 Tallan 'T-Man' Latz performs Monday, June 30, 2008, at Summerfest in Milwaukee. A blues guitar prodigy, the 8-year-old has played in bars and clubs, including the House of Blues in Chicago, and even jammed with Les Paul and Jackson Browne. However, the state of Wisconsin says that Tallan cannot play in taverns and nightclubs because of state child labor laws.
Photo/Morry Gash