Don't fret about Sen.Ted Stevens' indictment, like most setbacks for the Republicans, it's a great boon for America.

"I just the other day got, an internet was sent by my staff at 10 o'clock in the morning on Friday and I just got it yesterday. Why?
Because it got tangled up with all these things going on the internet commercially...

They want to deliver vast amounts of information over the internet. And again, the internet is not something you just dump something on. It's not a truck.

It's a series of tubes.

[Senator Stevens,] you don't know jack *bleep* about computers or the Internet. Hey, that's OK. You're just the guy in charge of regulating it. - Jon Stewart on "The Daily Show," July 12, 2006

A top Central Intelligence Agency official traveled secretly to Islamabad this month to confront Pakistan’s most senior officials with new information about ties between the country’s powerful spy service and militants operating in Pakistan’s tribal areas, according to American military and intelligence officials. 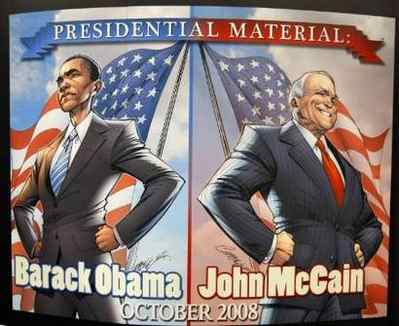 It's a year of superheroes in Hollywood, with the big-budget epics of Batman, Iron Man and the Hulk, but a big-budget production out of Washington, D.C., is carving a niche in the animation trend.

Presumptive nominees John McCain and Barack Obama will star this fall in their own comic books put out by IDW Publishing, a San Diego-based publisher better known for telling the stories of robots ("The Transformers") and vampires ("30 Days of Night").

Barack Obama went to the doctor today. He has a sore hip, apparently. Finally, the two presidential candidates have something in common. - Craig Ferguson

The whole Republican party is corrupt. Giving tax cuts to the rich (who are rich by the way, not poor or busted) while running up a national debt is the same as stealing money from the government. - AHNC Viewer

Across Capitol Hill, Democratic-led committees are considering punishments for past and present Bush administration officials for a range of alleged misdeeds, from discriminating against liberals at the Justice Department to blowing off subpoenas and lying to Congress.

"You know, they said on the news earlier tonight that this political campaign has only 100 days left. Only! Anybody complaining that this thing was dragging out? Oh, not quick enough? ... Only 100 days left. Oh, God! 100 Days. I don't know what's less likely, Barack Obama getting enough experience in 100 days, or John McCain living another 100 days." --Jay Leno

"I'm not the only one who noticed the press' bias against John McCain. So has John McCain. Last week, his campaign sent an e-mail to reporters saying, 'It's pretty obvious that the media has a bizarre fascination with Barack Obama. Some may even say it's a love affair.' This has got to be hard on McCain. It is tough seeing your old flame with someone new. John McCain and the media had a very hot fling back in the summer of 2000. They even had cute little nicknames for each other. The press called McCain 'maverick,' and McCain called the press any time he wanted favorable coverage." --Stephen Colbert

A High Ridge, Missouri woman says she has found Jesus in a bag of Cheetos. Kelly Ramey says, "I think I found Jesus on a Cheeto as funny as that sounds."

She bought a bag of a local convenience store, and inside the bag she felt something unusual.

"I looked at that and I thought, 'Oh my that looks like Jesus on the cross.' It was just like wow," she says.