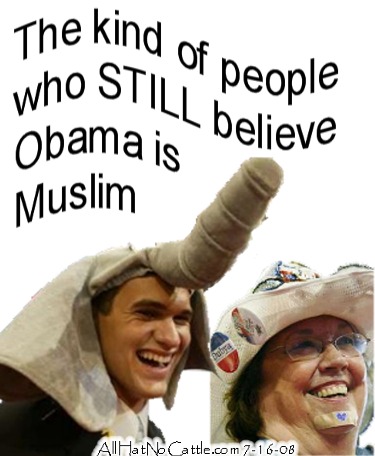 And California Governor Arnold Schwarzenegger said today he would be interested in serving as Barack Obama’s energy czar. At least, I think that’s what he said. He might have said, “Yeah, I would like to have an energy bar.” 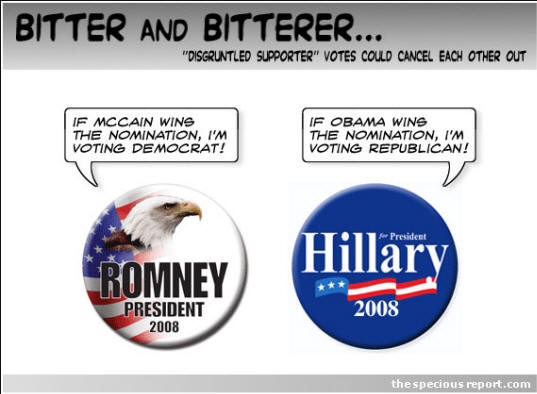 For the second time in two days, John McCain has referred to current events in “Czechoslovakia” — a country that officially ceased to exist in 1993. Afterwards, McCain said, “The same thing happened the last time I went to Mesopotamia.” - Conan O'Brien

A humorist like me sure knows
How tough it is to write, compose,
And sketch satiric toons and prose
And poems. It’s not without its woes.

The humor quand’ry, if you please:
This toon could fit with equal ease
In any right-wing, racist sleaze
And readily its readers please.

That’s why it draws this fit of pique
For spreading what it would critique,
Confirming to the knowledge-weak:
Barack Obama — Terr’ist Sheik!

perhaps the only way to survive another coronation is a little humor and satire. in the end after the balloons drop and the cheering stops and the lights go out, the extras get sent home. while the ruling class will go about their grotesque lavish lifestyles with our money, while we, (the wage slaves) more divided than ever (which pleases the rulers) are left to ponder, do we buy gas, or groceries?
jjj

It's a sad day when Democrats are more concerned about a cartoon than our sinking economy, two wars and the real enemy, John McCain. That's why we lose elections, we lose our focus and obviously our sense of humor.

Coalition warships seized 30 tons of narcotics over the past five months on Gulf patrols, cutting off possible funds for insurgents in Afghanistan, the U.S. Navy said in a statement Tuesday.

Today, President Bush lifted the presidential ban on offshore drilling that was imposed by his father, the first President Bush, 18 years ago. But hey, remember Bush’s dad also said invading Iraq would be a huge disaster, and cutting taxes would ruin the economy. So what the hell did he know? - Jay Leno

Faced Monday with a report that a rogue lobbyist urged an exiled Central Asian leader to support the Bush library to curry favor in Washington, library officials promised that no foreign money will be accepted until President Bush leaves office. On Tuesday, it became clear the public will have to take them at their word.

The foundation isn't promising to identify all donors, or the dates and sums of their gifts.

Rep. Dennis Kucinich's single impeachment article will get a committee hearing — but not on removing President Bush from office.

The House on Tuesday voted 238-180 to send his article of impeachment — for Bush's reasoning for taking the country to war in Iraq — to the Judiciary Committee, which buried Kucinich's previous effort.

Vice President Dick Cheney had his annual checkup this weekend. And his doctors were shocked. He is still alive.

A woman in Florida is being charged with assault because she attacked her boyfriend with a toilet seat after she caught him smoking crack in the bathroom. Florida police say that otherwise it was business as usual at Shady Pines Retirement Village. - Conan O'Brien

Bill Nye poses on the roof with his solar water heating panel, foreground, and solar electric panels, background, at his home in the Studio City district of Los Angeles Wednesday, May 14, 2008. Nye, the host of the educational series 'Bill Nye, The Science Guy,' and his neighbor actor Ed Begley are locked in a friendly but serious eco-battle of keeping up with each other. The two moderately famous and occasionally geeky environmentalists vie to see who can leave the smaller carbon footprint.
Photo/Reed Saxon