Gosh, I don't remember Israel doing anything positive after Bush made a speech, probably because no one could understand any of Bush's speeches. lol

"Rush Limbaugh said today he might change his mind about something. I'm like, what?! He said he might support President Obama's nominee for the Supreme Court. Wow! Sounds like someone got a new prescription." --Craig Ferguson 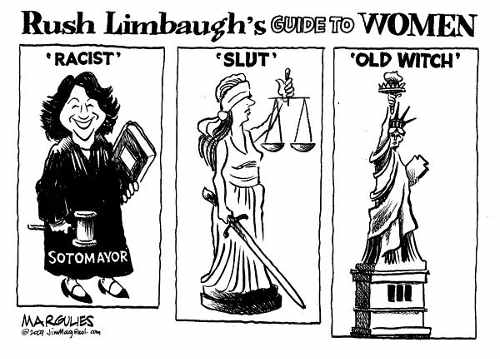 "And in the Osama bin Laden new tape, it's a long, crazy man, lunatic rant condemning President Obama. Oh no, wait a minute, that's Cheney. That was Cheney doing that." --David Letterman

An auto co known as GM
In the past was considered a gem.
It’s in bankruptcy now.
Will that hurt? Yes, and how!
But the GOP’s goal? Blame the Dem! 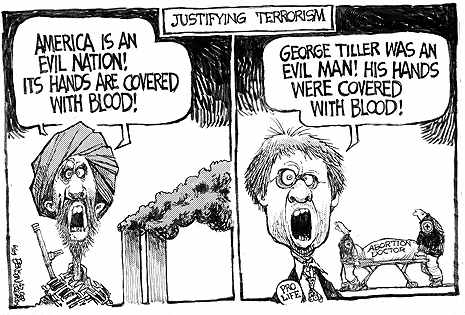 AHNC Trivia: Joe Scarborough voted against Federal protection for women's clinics when he became a US Congressman. Payback for the 15K donated by The Right to Lifers

"Yeah, Cheney's all hot about it. He says America is now less safe. He said Obama is making America less safe. And then to prove his point, Cheney shot a hunting buddy in the face. That's exactly what he did." --David Letterman

"Osama bin Laden put out a new audiotape today. I'm like, you're a bit behind the times, you know. We don't use the audiotape. Everyone is on Twitter now." --Craig Ferguson

"Hey, how about General Motors? Oh, my gosh. It's crazy what's going on. General Motors, bankrupt. Biggest corporation in the world and now they still want money. They still want billions more bailout money. I think I speak for all Americans when I say, 'You want more money? Wait here while I talk to the manager. I'll be right back." --David Letterman

All Hat No Cattle weekend commentary

The Downfall of Quality Politicians and Journalists Go Hand In Hand

I'm trying something a little different for this commentary.

Subject: You were surprised at the response of Democrats?

The primary function of Democrats, for the Bush years and it seems now, are to be a place to send lobby money to.

You seemed surprised at the answers you got on your question. Not me!

Yes, I was very surprised. Especially from the AHNC Democrats that wrote and said "Democrats let it happen". A statement that I partially but not fully agree with.

Dennis, I mostly agree with your first sentence. I don't think ALL Democratic politicians bow to lobbyists and their money, most but not all. Obama sure didn't while he was campaigning.

In my humble opinion, the emergence of neo-conservatism was led by Newt in the mid 1990s and was fully facilitated by Fox News and the new kid on the block MSNBC. The constant drumming  of Clinton and of Democrats/Liberals was beaten to death by those networks which led to almost $100 million spent in a variety of investigations by the Republicans. And Lo and Behold the House of Representatives impeached a president for cheating on his wife. Don't get me wrong, there's nothing more I hate then a whore dog. I've been cheated before on and it is an awful feeling. I've had fabulous bosses that cheated on their wives but they were still great bosses. That's how I feel about President Clinton. He was a whore dog, maybe still is a whore dog  but he gave us peace and prosperity. And for that I am grateful, very grateful.

The Washington press corp has sunk even lower since then. Another instance of Democrat bashing is the Washington press coverage of Gary Condit versus Joe Scarborough. Condit was convicted and hung out to dry when Condit's aide went missing, while the dead aide found in Scarborough's office never made national news. In fact, Joe seemed to be rewarded by MSNBC when he was given his own TV show not long after his poor aide's death. And now Joe is a journalist? What a joke. Morning Joe Joke.

So, yes, Dennis, I was surprised by the answers to my question

(see below for those who may have missed it.)

I was expecting people to answer the above question with instances of equal Democrat infractions and to engage in a discussion of comparison between the two parties. Instead they threw the baby out with the bathwater -- "the Democrats let it happen!" as most of my fellow Democrats emailed me.

History shows the Democrats fought hard against Nixon and his Watergate and the Reagan/Bush led Iran-Contra. Many convictions resulted.

I remember Democrats fighting hard against the impeachment of President Clinton too. And the Florida recount: my husband was tallying the votes in NW Florida as a stringer for AP at the time. Fact: Joe Scarborough's Pensacola was the only city in NW Florida that had the exact same numbers on recount. Amazing, huh? I was doing a business report on a local radio station at that same time and guess what happened in Pensacola the week before the 2000 election? Official pamphlets with the seal of the state of Florida were sent out to the black sections of Pensacola telling people to vote on Wednesday, not Tuesday. Nice Republican touch, eh? I bet you didn't read about that nationwide. Another disgusting instance of reporting was the outing of CIA agent Valerie Plame Wilson who the neocons and press inferred that she was nothing more than a secretary for the CIA, instead of the fact that she was performing the very dangerous job of tracking the proliferation of nuclear weapons . But the Democrats didn't control Congress as they did under Nixon and Reagan, so their investigations were very limited and the majority of the Washington press corp seemed satisfied with promoting the conservative agenda instead of rolling up their sleeves and being unbiased journalists. Remember when investigative journalists had two sources for confirmation of an article. Today, journalists quote each other's articles or news reports as sources. I call that "incestuous journalism".

I feel that most of the politicians that are Democrats today are letting Bush and company literally get away with murder. Pelosi nailed that coffin when she took impeachment off the table when the Democrats took control of Congress in 2006.

Democrats need to adapt a razor sharp focus and unite once again. They need to beat the drum of truth to counter the conservative news distortion and racism that is still prevalent in this country.

Obama has gotten good press coverage from the Washington press corp and I believe it's because Obama has few faults. What have the right wingers blamed Obama for? That he loves arugula? That he has a fake birth certificate? That he's a "Muslin". (intentionally misspelled), that he "pals around with terrorists" as Sarah Palin repeated time and time again. And today, right wingers say he picked a racist for the US Supreme Court? Well, the truth seems to have bitten Rush and Newt on their fat asses and they softened their racist accusations, now didn't they?

My point  is we have been fed crap news for way over a decade. And this enabled the rise of neo-conservatism. Most Americans only know what comes across their TV screens and  "journalism" has returned to that ugly shade of yellow of nearly hundred years ago. 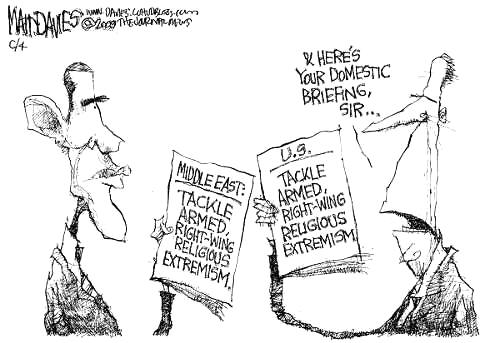 "How about that Dick Cheney? Do you remember Dick Cheney? Now here's a guy we didn't really think much about until he goes hunting one day. And everything changed. I mean, he became Dick 'Kaboom' Cheney. He is now saying that Saddam Hussein had no connection with 9/11. Well, no harm done." --David Letterman

An old man, Mr. Wallace, was living in a nursing home. One day he appeared to be very sad and depressed.
Nurse Tracy asked him if there was anything wrong,

Knowing her patients were a little forgetful and sometimes a little crazy, she replied, 'Oh, I'm so sorry, Mr. Wallace. Please accept my condolences.'

The following day, Mr. Wallace was walking down the hall with his Private Part hanging out of his pajamas. He met Nurse Tracy.


'Mr. Wallace,' she said, 'You shouldn't be walking down the hall like that. Please put your Private Part back inside your pajamas.'

'But, Nurse Tracy I can't,' replied Mr. Wallace. 'I told you yesterday that my Private Part died.


'Yes,' said Nurse Tracy, 'you did tell me that, but why is it hanging out of your pajamas?'

Something New at All Hat No Cattle

Question of the week: "President Obama receives an international arrest warrant for Bush, Cheney, Rumsfeld, et al for war crimes and crimes against Humanity.  What should he do?"

Is There A Doctor In The House?

She has about 10 lumps on the right side of her neck extending from below her ear to her collarbone. They are soft and free floating and are growing. The lumps are small starting below her ear and increase in size to her collarbone where the largest one is about the size of a golf ball. They do not cause her pain. She has lost weight recently to the tune of about 15 lbs, she now weighs about 118 lbs. She blames the weight loss on the stress from her alcoholic husband, not her neck. I don’t buy it.

She has been without health insurance since her husband quit his well paying job a few years ago. She does work out of her home to pay the family bills and cannot obtain health insurance because she was told those undiagnosed lumps are a pre-existing condition. She does not qualify for Medicaid because she owns her home and has a small savings account.

She went to her primary care physician many months ago and was told she would need a battery of blood tests, mri, cat-scan, xrays, etc. Well over $10,000. She does not have $10,000. She said even if she did have $10,000 for the diagnosis, how would she pay for the treatment.

Does anyone have any ideas on what she can do?

I'm so ashamed that we live in a country that does not provide affordable health care for its citizens.

Thank you so much for all of your suggestions. I have forwarded your emails to her. As of yet, nothing has come to fruition. I'll keep you all updated. 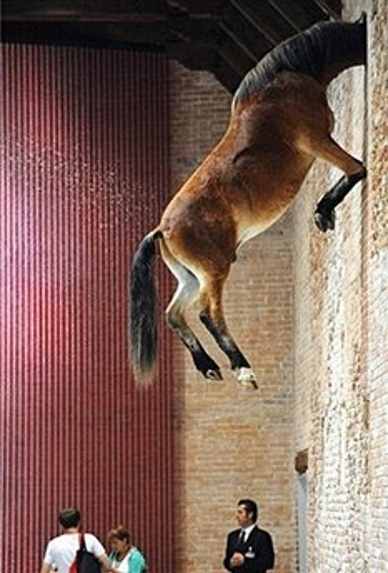 "Untitled 2007" by Italian artist Maurizio Cattelan is on show during the opening of the Punta della Dogana in Venice.
Photo/Alberto Pizzoli