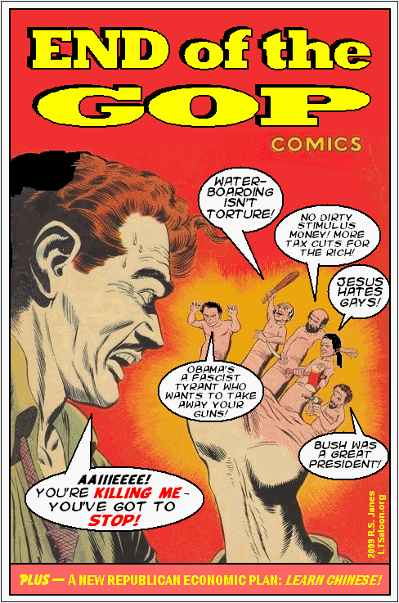 "Hey, have you all started making your summer vacation plans? I'm not sure what to do this year. I'm stuck between a Somali pirate cruise or a trip to a Mexican pig farm." --Jay Leno 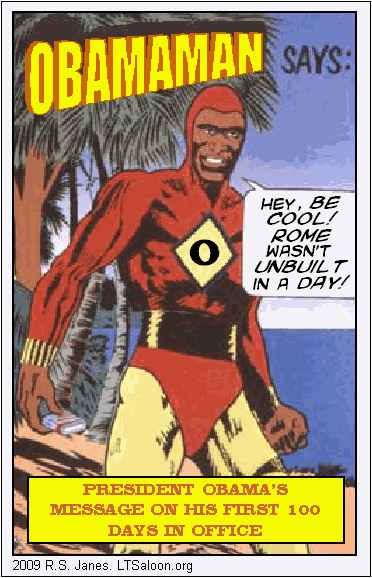 "But, hey, people are very worried about this swine flu epidemic, but the best course of action is prevention. Like, if you go to IHOP and you order the pigs in the blanket, and you notice they're coughing, you don't want to eat that." --Jay Leno

While Vice President Cheney has publicly defended the Bush administration's use of enhanced interrogation techniques such as waterboarding, other senior decision-makers at the time have remained silent. But former secretary of State and national security adviser Condoleezza Rice -- who declined to comment last week on the release of Justice Department memos authorizing the practice -- was caught on video tape this week giving a finger-wagging defense to a persistent Stanford University student. 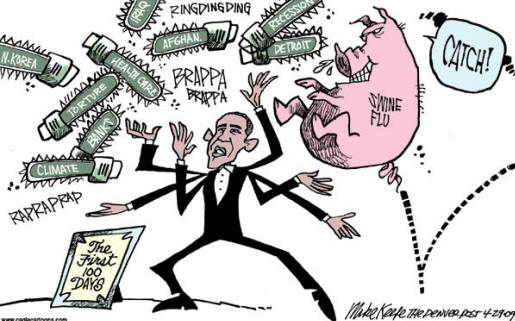 The Senate handed a victory to the banking industry on Thursday, defeating a Democratic proposal that would have given homeowners in financial trouble greater flexibility to renegotiate the terms of their mortgages. 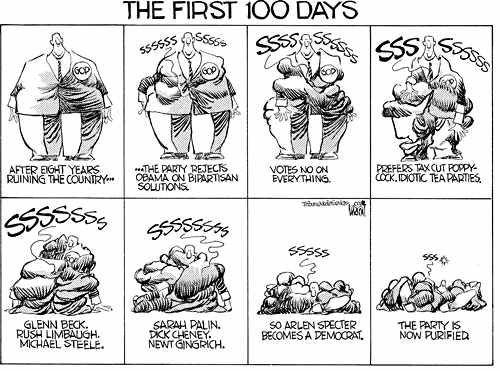 "They said today you cannot get swine flu from eating pork, which, of course, raises the question, so what were these guys doing with the pig?" --Jay Leno 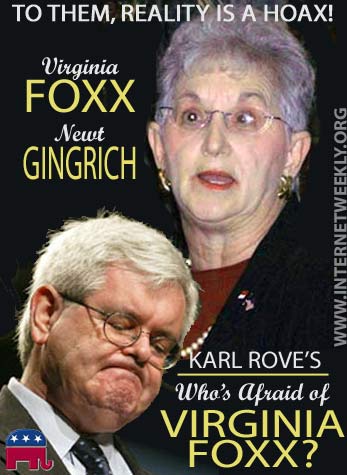 Who's Afraid Of Virginia Foxx?

Yet Another Right Wing Racist!

"Seventy-nine-year-old Arlen Specter is now switching to the Democratic Party, which is a big loss for Republicans. You know, when they lose that young blood, it hurts." --Jay Leno

Harriet Miers is all a dither about her second chance for a Supreme Court nomination. - Grant "Bud" Gerver 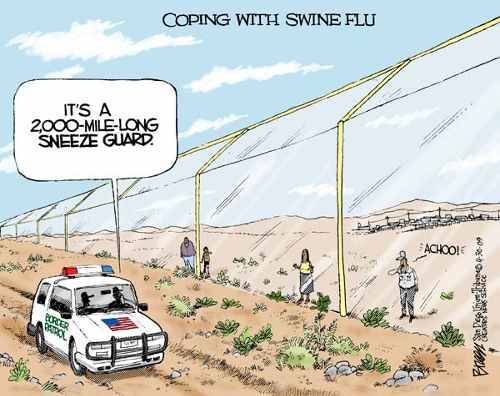 "The President held a press conference tonight in prime time. All the major networks carried it, except Fox. They ran the show 'Lie to Me' instead of the president. Fox is something -- they killed President David Palmer off '24,' they put his brother, President Wayne Palmer, into a permanent coma, and now this. What does Fox have against black Presidents?" --Jimmy Kimmel 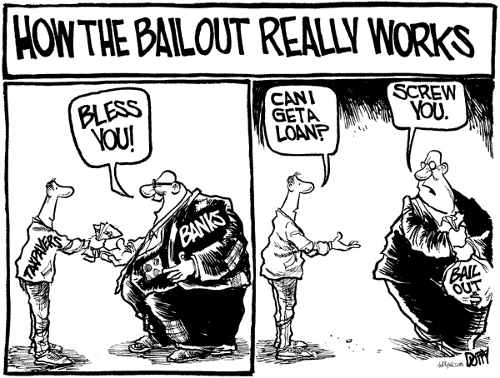 "Today was President Obama's 100th day in office. Isn't that amazing? Actually, when you think about it, George W. Bush was president for eight years, and he never came close to spending 100 days in the office. So, we're way ahead." --Jay Leno

Remember, it's not torture if you call it "interrogation techniques." - Grant "Bud" Gerver 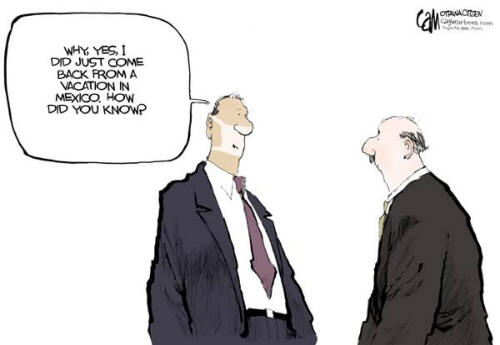 It’s hard to believe how far right the right has turned. Riiiight!

Remember: You read it here first.
Sean Hannity has reneged – as predicted by AHNC seven days ago – on his recent statement that he would undergo waterboarding because “it is not torture.”
AHNC commented last weekend that Hannity’s lame attempt at uber-patriotism would backfire because he is both cowardly and stupid. AHNC predicted that he never would submit to the simulated drowning practice that has been dubbed an “enhanced interrogation technique” by extremist right-wingers. (The practice was invented by the Spanish Inquisition and refined by the People’s Republic of China, which practiced it on U.S. prisoners during the Korean War. The United States considered it torture then.)
True to form, Hannity has backed down. Another chicken hawk proving that he is just plain chicken shit.
That, however, has not prevented his defenders and fellow travelers of the far right from rising to the defense of their outspoken, misspoken and poorly spoken talking head from FOX “news”.
Elisabeth Hasselbeck of ABC’s “The View” said Hannity didn’t really mean what he said. He was just talking, just conversing.
That sounds like an explanation for most of what Hannity says. Opens mouth, inserts foot, thinks about it later. Or maybe he doesn’t think about it – before or after.
Then former Secretary of State Condoleezza Rice offered her well-reasoned and deeply intellectual opinion that waterboarding of terrorism suspects and prisoners taken during the Iraq war was not torture because then-President George W. Bush approved it. This fool should have her bachelor’s and graduate degrees revoked by the institutions that awarded them.
But it gets better. The implosion of the Republican Party continued unabated as the week went on.
A matronly, middle-aged and stridently anti-gay Republican Congresswoman from North Carolina declared that the hate-crime murder several years ago of a gay man in Wyoming was – “as we all know” – the result of his being involved in a robbery. She forgot to mention that he was the victim of the robbery, and that his killers selected him because he was gay. And she spewed out her venomous bile while the mother of the victim sat in the audience.
And let’s not forget Michelle Bachmann. The far-right Congresswoman from Minnesota was caught babbling – again – on the floor of the House of Representatives this week about the swine flu virus and the need for protectionist trade practices.
As usual, the starry-eyed mental lightweight erroneously stated that the last time swine flu hit the United States was under the presidency of Jimmy Carter. (It was during the administration of Republican President Gerald Ford.)
Then Bachmann made reference to the “Hoot-Smally Act” that increased trade protectionism. She said it was passed during the presidency of Franklin Delano Roosevelt and that it contributed greatly to the Great Depression.
She was wrong on two of three counts. The Smoot-Hawley Act (named for its two Republican sponsors) was passed under Republican President Herbert Hoover. It did contribute to the Great Depression, most economists agree, because is reduced trade.
But we don’t want to confuse these right-wing nuts with a recitation of historical facts. We just want to see Hannity live up to to his commitment.
Then we want to see pigs fly. 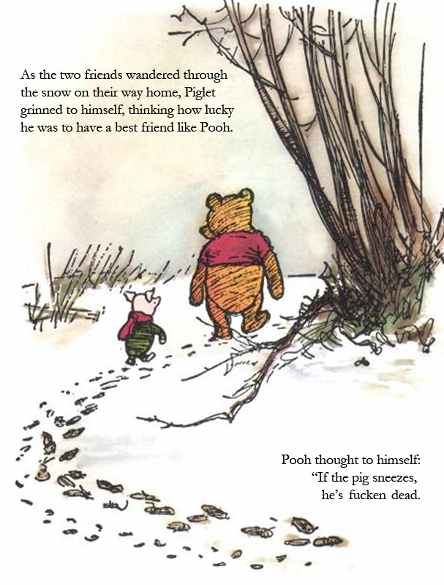 Sent in by Dennis

Thank you all for your get well wishes. I'm feeling a little bit better except for the spaciness. [insert dumb blonde joke here] 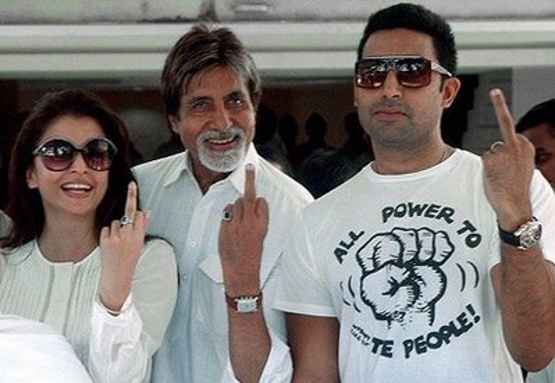