Another Monday, another Bush scandal.

Maybe the Rapture already happened and none of us was any good! -- Zing!

Ode to the Leaker-In-Chief

"The latest revelation
In the Scooter Libby case,
Is that when it comes to leaking,
Georgie Dub is quite the ace.

Those weren't aberrations
When he ordered up those leaks.
Bush betrays his office daily... " 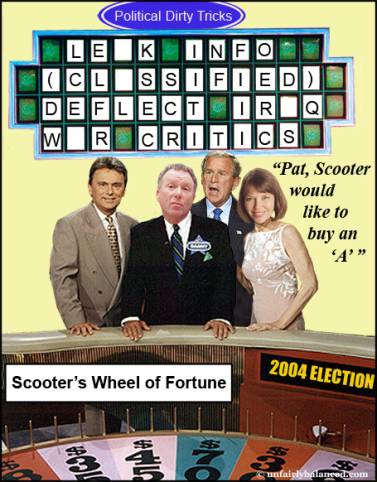 “A 41-year-old teacher in Albany, New York, suspended after he got caught giving a 10-year-old student a wedgie. You know where a pervert like that will end up? The Department of Homeland Security!”--

Cheney Shot While at Halliburton

Years before Vice President Dick Cheney accidentally shot a lawyer on a Texas quail hunt, Cheney himself was on the receiving end of an errant shotgun blast during a quail outing in New Mexico.

Carlsbad Mayor Bob Forrest said he doesn't know for certain if he or his twin brother, Dick Forrest, fired the shot during the late 1990s that accidentally pelted Cheney -- at the time the chief executive at the Halliburton company.

All in the Family

Aeneas is under scrutiny by the Justice Department and Congressional investigators. Its founder, Robert Abramoff, a lawyer and sometime Hollywood movie producer, is the brother of Jack Abramoff, the Republican lobbyist at the center of a Washington

----Please support our advertisers. They are just a click away---

A congressional hopeful wrecked his car and wandered a mile in a daze, swimming across a river and then huddling under leaves for warmth

until he was found alive a day later, officials and relatives said.

"Senate leaders announced they made a huge breakthrough in reforming immigration laws. Then the senators adjourned early so they could drop their illegal nannies at the bus stop." -

It was with some trepidation that we opened a most interesting card, which announced on a blue-jeaned cowboy's belt buckle something called the "5th Annual VOLPAC '06 Weekend" in Nashville on April 21-23.

Problem was you had to unbuckle the cowboy's pants and look inside to see what this was all about. Seemed a bit too "Brokeback Mountain."

Whenever the president travels, security is a prime consideration. Motorcade routes are kept secret, and premature release of information about a presidential trip aboard one of the twin Air Force One planes can result in the Secret Service canceling a visit.

Thus, the Air Force reacted with alarm last week after The Chronicle told the Secret Service that a government document containing specific information about the anti-missile defenses on Air Force One and detailed interior maps of the two planes -- including the location of Secret Service agents within the planes -- was posted on the Web site of an Air Force base.

10. "Feels great to get away after three straight weeks of work"

9. "As president of the United States, I pledge to do whatever's necessary to help the Cancunians!"

7. "Cozumel? Isn't that the chick I made Secretary of State?"

5. "Holy crap, how'd they move these pyramids from Egypt?"

4. "I'll have a non-alcoholic pina colada...just kidding, juice me up, Pepe!"

1. "Once you get a little buzz going, my poll numbers don't look so bad"

Success is the ability to go from one failure to another with no loss of enthusiasm. -

Audience members who expected to see Bill Nye “The Science Guy” conduct experiments and wow their children received quite a surprise Wednesday when Nye spoke at McLennan Community College...The Emmy-winning scientist angered a few audience members when he criticized literal interpretation of the biblical verse Genesis 1:16, which reads: “God made two great lights — the greater light to govern the day and the lesser light to govern the night. He also made the stars.”

He pointed out that the sun, the “greater light,” is but one of countless stars and that the “lesser light” is the moon, which really is not a light at all, rather a reflector of light.

A number of audience members left the room at that point, visibly angered by what some perceived as irreverence.

“We believe in a God!” exclaimed one woman as she left the room with three young children. 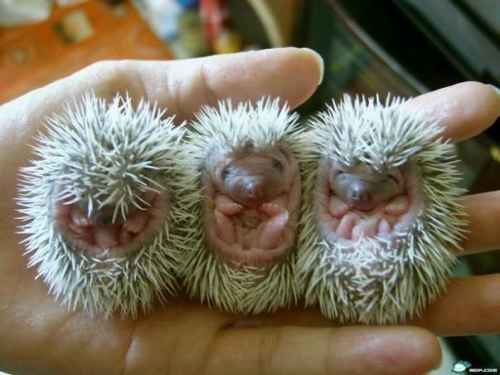 Three baby porcupines that give a whole new meaning to labor pains. Photo sent in by AHNC viewer, Duggly