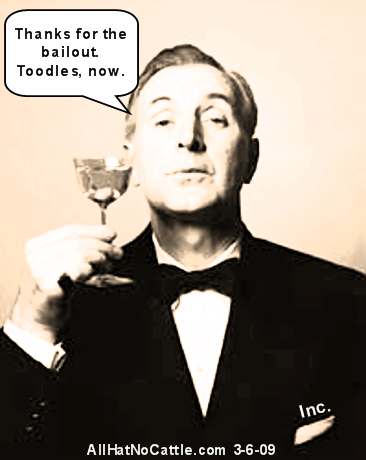 I wonder when Rush will step on his elephant trunk?

"I don't need to tell you folks, but the economy is so bad right now that over 1,000 Americans have volunteered to become the Obama dog." --David Letterman

A Rush Limbaugh/Jon Stewart Debate Would Be Interesting

If you make a date to be on a late-night talk show, it's best not to back out.

John McCain learned that lesson the hard way with David Letterman last fall, and CNBC reporter Rick Santelli just took it on the chin from Jon Stewart. Santelli and his network wouldn't comment Thursday on Stewart's brutal takedown during Comedy Central's "The Daily Show" on Wednesday.

"President Obama -- talk about a tough gig, and talk about optimism. The guy is saying it's a good time to buy stocks. So here's what you do. Instead of that latte you buy in the morning, pick yourself up a thousand shares of GM." --David Letterman 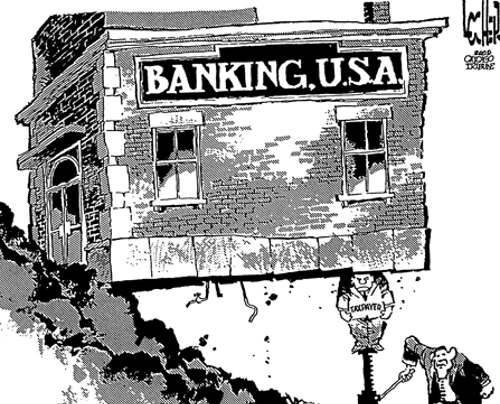 "By the way, ladies and gentlemen, Rush Limbaugh is the new face of the Republican Party. And I'm thinking, if I see any more of Rush Limbaugh, I'm going to have to send my housekeeper out to buy me painkillers." --David Letterman 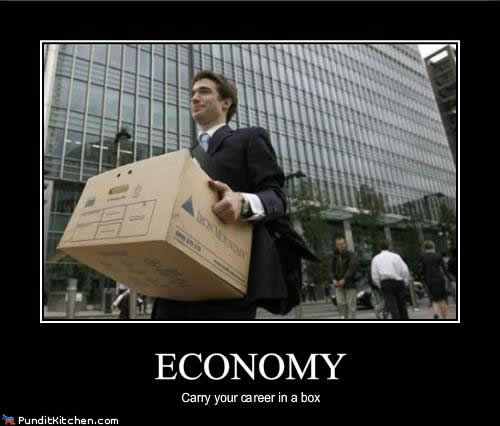 Its like watching crazy people running Wall St and our financial institutions.

More and more crooks are surfacing like Bernie Madoff.

And who is sitting in a cell?

Hrumph, they are lounging in luxury and giving themselves bonuses while their ship is sinking. They're nothing more than leeches.

You think these Gordon Gekkos are going to cooperate with Obama? I don't. The stock market proves it.

It is us against them.

Henry, I answered an email earlier and my response fits your email:

Banks are legal thieves, IMHO. It's no wonder we're bailing them out. I hear ya though. What I have been through recently trying to refinance etc...just exasperating.

I am pessimistic about Obama's stimulus plan because I think the "financial institutions" are going to continue with their bonuses and perks instead of attending to the needs of their customers.

Former GE CEO Jack Welch said it all recently (paraphrased)," Am I going to do business with the bank that takes me to lunch at McDonald's or the one that takes me on a 2 day weekend in the Bahamas. That's how business is done."

And they and WALL ST are fighting Obama tooth and manicured nail with their spa lubricated hands.

I agree wholeheartedly, it is us against them. And sadly, we're both losing.

Joe the Plumber versus Obama

Judicial Watch formally filed a federal civil rights law suit on behalf of Samuel Joseph Wurzelbacher, Joe the Plumber ... "It is our contention that there is an open question whether Joe the Plumber was number one on Obama's enemies list," Fitton said, referring to the alleged White House enemies list including Rush Limbaugh. "We already have evidence that government officials were misusing government resources to, in our view, to try harm our client for speaking out against Mr. Obama." 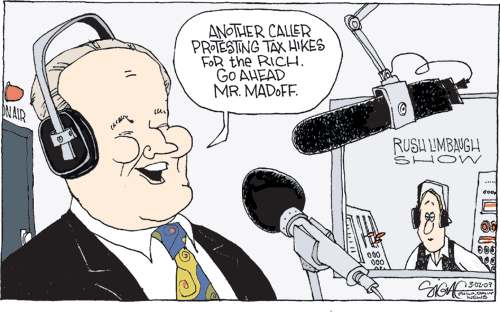 One in every 31 U.S. adults is in the corrections system, which includes jail, prison, probation and supervision, more than double the rate of a quarter century ago, according to a report released on Monday by the Pew Center on the States.
The study, which said the current rate compares to one in 77 in 1982, concluded that with declining resources, more emphasis should be put on community supervision, not jail or prison. 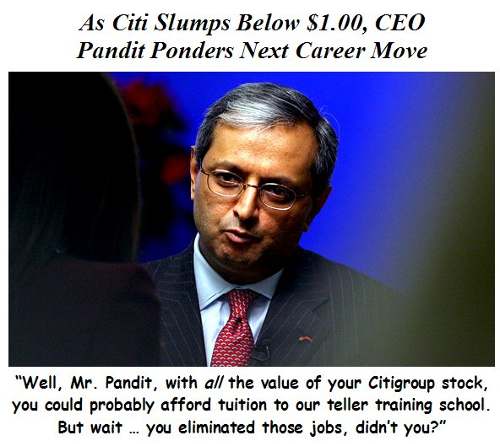 I can't decide between a value-menu burger or a share of Citi. - Grant "Bud" Gerver 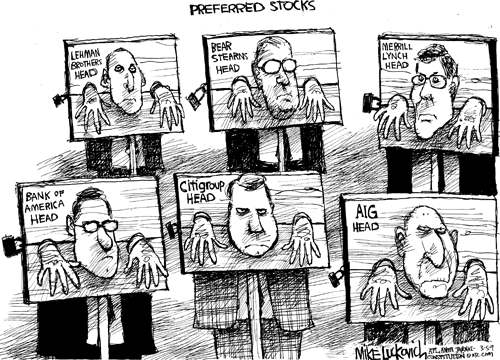 British fraud investigators are probing the activities of accused Wall Street scammer Bernard Madoff's London office for possible money laundering, a law enforcement source said yesterday...Madoff, who remains under house arrest in Manhattan on $10-million bail, has a scheduled court date a week from today, when prosecutors must either indict him, announce a plea bargain or adjourn the case. 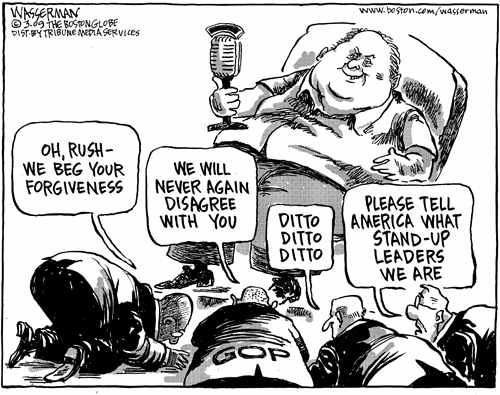 "So for all you dumba** homeowners out there who let your optimism and bad judgment blind you into accepting money that was offered to you from banks, educate yourselves [on screen: clip of CNBC analysts saying that the housing industries were fine]. It's not rocket science, homeowners. It's just alchemy. You just had to tune into CNBC's shows, like 'Fast Money' and 'Squawkbox.' Reasoned financial reporting that combines the raw speed of 'Fast Money' with the intelligence of a box of parrots. You just had to listen. [on screen: clips of CNBC analysts saying it was 'time to buy']. Wow! If I'd just listened to CNBC I'd have a million dollars today, provided I started with a hundred million dollars." --Jon Stewart

Newt Gingrich is talking out loud about a possible run for the White House in 2012.

In 1857, the United States Supreme Court ruled in Dred Scott v. Sandford that Scott, a slave, was not an American citizen and could not sue for his freedom in federal court.

Five years ago: President George W. Bush backed off on plans to require frequent Mexican travelers to the U.S. to be fingerprinted and photographed before crossing the border.

One year ago: A Palestinian killed eight students at a Jewish seminary in Jerusalem before he was slain. Twin bombings in a shopping district in Baghdad killed at least 68 people and wounded 130 others. 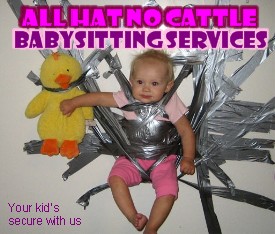 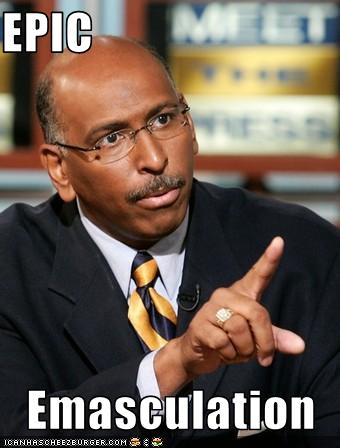 All Hat No Cattle weekend commentary

Observing the Republican Party lately has been like watching the last cannibal on a deserted island. He starts with his own left foot. (Some anthropologists theorize that this is where the phrase “getting off on the wrong foot” originated.)
Let’s review chronologically:
1) Sat., 2/28 – Republican National Committee Chairman Michael Steele, the first black to hold the post, makes an uppity, suicidal decision to criticize right-wing radio icon Rush “Da Man” Limbaugh. Steele already has horrified the conservative base by using phrases like “urban-suburban, hip-hop settings” and “young, Hispanic, black — a cross section” to describe the larger constituency that the GOP should seek if it ever wants to win a national election again.
2) Sun., 3/1 – Millions of Da Man’s minions demand apology from Steele or his head on a pike.
3) Mon., 3/2 – Steele says “Sorry massah” and only gets a public flogging.
4) Tues., 3/3 – Grumblings about Steele by GOP kingmakers and behind-the-scenes players continue, with some criticisms of him leaked to the news media for anonymous use.
5) Wed., 3/4 – Steele denies that he criticized Rush; he claims he was criticizing what Rush’s detractors say about Rush – that he’s “hateful”, “incendiary”, etc. Steele obviously is lying. Gets flogged some more – not for lying, but for getting caught lying so obviously on TV.
6) Thurs., 3/5 – Millions of minions complain some more about Steele and his errant ways. Steele apologizes again for the falsely perceived criticism of Da Man that Steele now claims he never intended as criticism. Gets flogged again.
7) Fri., 3/6 – Dr. Ada Fisher, one of only three blacks among the 183 members of the Republican National Committee, acknowledges she sent an e-mail to 11 other committee members suggesting that maybe, just maybe, Steele should resign or be replaced through another RNC election of a new president. More public flogging ensues.
8) The future – Steele, who has been leading the RNC for only one month, contemplates hanging himself rather than face further flogging or possibly even lynching at the hands of his beloved fellow Republicans. But he screws that up, too, and ends up banging his head hard when his rope breaks and he hits the floor. He wakes up to realize that maybe he should have been a Democrat.
Actually, that last part – No. 8 – is pure fiction. Steele has not hanged himself or even resigned. Yet.

Hi, Lisa! Keep up the good work! Yer the best! (along with Marty at BCE)... If' I wasn't a Wolverine from the Great White North, I'd stand at yer stoop, flowers and hat in hand... BadtotheboneBob

At my age, I'll take all the compliments I can get.

Big thanks, Bob and the many years you have supported me.

Mint Julep? Too strong for me. I prefer chardonnay a la box. 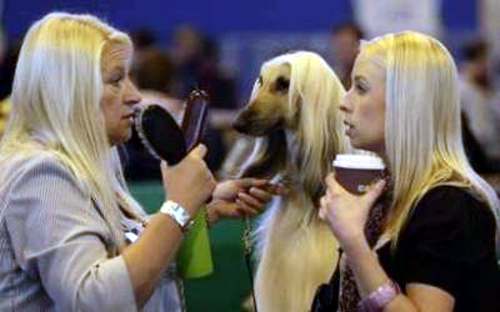 Women stand with their Afghan Hound before going into the parade ring during the Crufts dog show in Birmingham, central England, March 5, 2009.
Photo/Darren Staples