I wonder what Osama is up to these days? I wonder if Bush wonders?

"The White House keeps changing its story about who fired these U.S. attorneys. First it was the Justice Department, then it was Harriet Miers ... and the new e-mails released yesterday suggest it's Karl Rove's idea. ... Of course the problem with e-mails is you think you've erased them and then they're still there. Which is why President Bush writes all his memos on an Etch-E-Sketch." --Bill Maher 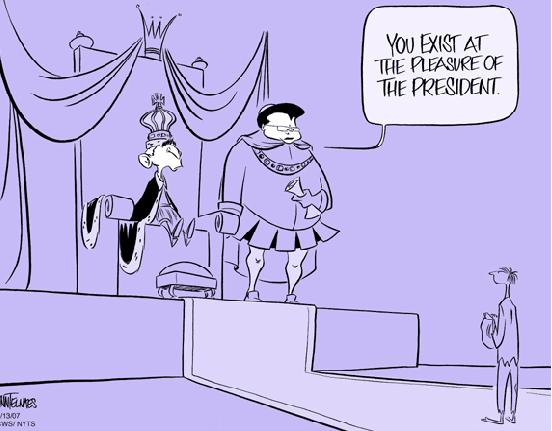 "Donald Rumsfeld, former Secretary of Defense, was admitted to a Washington hospital yesterday for a heart procedure. They said this is the first time in medical history that the patient had more blood on his hands than the surgeon." --Bill Maher

Serve the President's Pleasures or Else!

While Patrick Fitzgerald was prosecuting the CIA leak case, his name appeared on a Justice Department chart that was the first step in an effort to identify U.S. attorneys who should be removed, The Washington Post reported on Tuesday.

The Justice Department ranking of Fitzgerald, which was sent to the White House in March 2005, listed him among prosecutors who had "not distinguished themselves" and put him below "strong U.S. attorneys . . . who exhibited loyalty" to the administration, but above "weak U.S. attorneys who ... chafed against administration initiatives, etc.,"

A former White House official accused of improperly editing reports on global warming defended his editing changes Monday, saying they reflected views in a 2001 report by the National Academy of Sciences. House Democrats said the 181 changes made in three climate reports reflected a consistent attempt to emphasize the uncertainties surrounding the science of climate change and undercut the broad conclusions that man-made emissions are warming the earth.

"The big rumor is that Newt Gingrich may run for president. Newt Gingrich has the best reason to stay out of the Mid East -- he knows they stone adulterers." --Jay Leno

...Stop the presses. I said Valerie Wilson was a "covert" officer? This is a canard that some Republican spinners have been peddling for years, in an attempt to get Novak off the hook while muddying the waters. I long ago gave up on persuading conservative ops like Toensing that this is nonsense they should drop, and I no longer routinely reply every time the silly charge is repeated. But when someone testifies falsely about you to Congress, you practically have a civic duty to call him or her on it...

About one-third of the people living in the national's capital are functionally illiterate, compared with about one-fifth nationally, according to a report on the District of Columbia.

"For St. Patrick's Day, all the presidential candidates get into it. Have you noticed that? John McCain had a green tie on, Hillary Clinton had a green scarf, Rudy Giuliani was wearing a green dress." --Bill Maher

"Military contractor Halliburton announced this week that it is moving its corporate headquarters from Houston, Texas, to Dubai. A Halliburton spokesman said Dubai was chosen because of its convenient location just outside the long arm of the law." --Amy Poehler

Use smoke, mirrors to combat global warming?
Those and other ideas are floated as ways to engineer a cooler Earth

For information about me, my books, the tour: www.iowapeace.com  — or
write to me: mpalecek@rconnect.com .

The 'Pueblo Fantasma' or ghost town is seen at the Catorce sierra near the old mining town of Real de Catorce, Mexico, Feb. 23, 2007. Using just your driver's license or birth certificate, Americans can cross the border and spend a day buying trinkets and even tequila in one of Mexico's dozens of border towns, all scattered between Tijuana and Matamoros. Or, if you have a long weekend and want to explore farther south, you can take a bus or drive to old mining towns that seem untouched by time, like the mountain-top Real de Catorce. (Photo/Guillermo Arias)