Today's cartoon was inspired by this funny political humorist.

US TO INVADE FRANCE?

WASHINGTON- The U.S. warned that it may occupy France because the French have "wines of mass consumption." At the United Nations, Secretary of State Colin Powell showed satellite photos also documenting French stockpiles of champagne and goose liver, "which they won't hesitate to use." France's major offense, however, is that it is being a pain in the derrière over Iraq. "Pardon my French," said White House spokesman Ari Fleischer while wearing a green beret, "but they keep going 'non, non' when we want them to go 'oui, oui.'"

Here is some non-educational information that you may be interested in. In case you didn't know, it's a state of Florida policy under the freedom of information act (notice that it still applies to them) that they can release the information that's printed on your driver's license. The FL DMV is authorized to give out (sell for $10) your personal information to anyone who chooses to buy it. That information may include name, DOB, phone number, address, SS#, Medical disabilities, etc.

If you go to http://www.hsmv.state.fl.us/ddl/DPPAInfo.html  you can request that your name not be sold to various commercial interests. You will need your DL number to file.

Thanks Dave. Stalkers must love this Florida invasion of privacy.

Eglin Air Force Base tested the biggest nonnuclear bomb in the current U.S. arsenal for the first time Tuesday, a 21,000-pound bomb that could play a dramatic role in an attack on Iraq.

Around noon yesterday I was watching CNN's Wolf Blitzer discuss the testing of this bomb with Barbara Starr, news reporter.  Blitzer made a comment something like this: "If you look in the Old Testament, in the book Isaiah, you will find MOAB."

CNN is now lacing news reporting with biblical reference?  Did anyone else hear Blitzer say that?

AL-TAJI, Iraq (March 12, 5:36 a.m. PST) - A remotely piloted aircraft that the United States has warned could spread chemical weapons appears to be made of balsa wood and duct tape, with two small propellers attached to what look like the engines of a weed whacker.

Here's the smoking gun George W. Bush needs!  A dangerous drone made out of duct tape!  Elevate the terror alert to RED!

Is there a Miami Vice - Whitehouse Connection? Inquiring minds want to know. 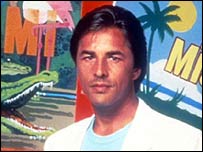 Don Johnson starred as a vice officer in 1980s hit Miami Vice
German authorities are investigating documents found in the car of former Miami Vice star Don Johnson that detail transactions worth $8bn (£5bn).
But a customs spokesman said there was "no indication" of illegal activity and that it was not a criminal investigation.

The actor's car was stopped for a routine check on the Swiss-German border as he entered Germany in November.
click here

What was Don doing, buying the country of Monaco?

There's got to be more to this story.