"And this week, they will flip the switch on the White House Christmas tree, which has over 25,000 lights on it, one light for every CEO that's looking for a bailout." --Jay Leno

What's Jeb Bush Been Up To?

Former Florida Gov. Jeb Bush – the younger brother of the president – is weighing a run for the Senate seat currently held by Republican Mel Martinez.

Martinez announced Tuesday that he will not seek reelection in 2010. Asked whether he was interested in running for the seat then, Bush told Politico by email Tuesday night: “I am considering it.”

Former Gov. Jeb Bush was named to the board of directors for Rayonier, a Jacksonville-based timber and real estate company that claims ownership of 200,000 acres along Interstate 95 from Savannah, Ga. to Daytona Beach....In 2000, Bush blasted a $20 million deal with the company as too expensive but joined a unanimous vote from the Cabinet to approve the agreement. Here’s his quote that ran in the Orlando Sentinel and the Vero Beach Press Journal:

“Man, I can’t wait to get back into the real estate business and sell property to the state,” Bush said. 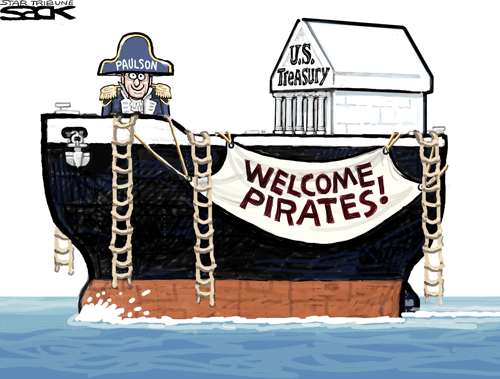 The Drug of Choice: Money

Duffel bags stuffed with cocaine were delivered by plane to an out-of-the-way suburban airport while two sheriff's officers provided security. A police officer stood by to guard the cash and keep out the riffraff at a poker game where $100,000 changed hands. And a drug dealer was told squad cars marked "sheriff" and "sheriff's police" might be available on a "freelance" basis to provide protection for his deliveries.

Such tales of law enforcement gone awry emerged in court papers Tuesday as federal prosecutors unveiled a series of elaborate sting operations aimed at officers who hired out to ride shotgun for drug deals and other criminal activities.

Turns out Alaska Gov. Sarah Palin wasn't the only candidate with donor-financed duds

At least five candidates used campaign money for clothing, according to a complaint that a watchdog group filed Tuesday with the Federal Election Commission.

Citizens for Responsibility and Ethics in Washington said the campaigns of Democratic Reps. Loretta Sanchez of California and Rob Andrews of New Jersey, Republican candidates Bill Dew of Utah and William Breazeale of North Carolina and Libertarian presidential candidate Bob Barr each spent hundreds of dollars on clothing.

Sarah Palin was being interviewed at a turkey farm in Alaska last week when the cameras showed turkeys being slaughtered right behind her. What was she thinking? She has the job on Saturday Night Live if she wants it, she can stop making demo reels.- Argus Hamilton

Just Separate Church And State Once And For All!

A group of atheists filed a lawsuit Tuesday seeking to remove part of a state anti-terrorism law that requires Kentucky's Office of Homeland Security to acknowledge it can't keep the state safe without God's help....Of particular concern is a 2006 clause requiring the Office of Homeland Security to post a plaque that says the safety and security of the state "cannot be achieved apart from reliance upon almighty God" and to stress that fact through training and educational materials.

"Seems ironic that the flamiest state in the union voted against gay marriage, doesn't it?"- Jimmy Kimmel on the Southern California wildfires

Thank you for taking the time to describe your Thanksgiving. Due to
many circumstances, my husband and I spent Thanksgiving quietly alone
(first time in 39 years of marriage). I think my husband was a little
"down in the dumps" about it while I was thankful for the peace!
Reading your account only reinforces my point of view! I feel so
sorry you, but I have been through many Thanksgivings like the one you
describe.

Thanks for sharing! Where would we be without patience and a sense
of humor????

I hear ya...and to think I never even mentioned Sarah Palin and her talent for field dressing a moose!

After reading about YOUR Thanksgiving, I have decided that we must be related - because I too have a similar bunch of Republican turkeys, but mine live in the state of Virginia. Over the years, we have had many dinner-table conversations, such as you described, that just avoid becoming fist-fights - but that's only because my relatives (and myself) are all advanced in age. My dearest cousin (who is fast approaching her 70th birthday) and her husband have a picture of George W Bush hanging over their bed - and because of their age, we KNOW it's not being used for birth-control either! So you see, that I know, from where you are coming... "Oy Vey" is all I can say. All and all, I'd say this was a pretty entertaining piece - I am still laughing.

I think most families/friends have political divisions, especially during the holidays...it's the American way! lol

Have a great day.

I read you piece about your Thanksgiving ordeal. My heart aches for you. I quit doing the holiday meals with family years ago and feel much healthier for it. I was happy to hear you are continuing with your website for the foreseeable future. Keep up the good work.

Thanks for the comments! Yes, I sure didn't fit into that flock of turkeys. It'll be a long time before I attend my cousin's holiday meals again. I'd rather poke myself in the eye with a sharp stick. lol At least the food was very good and so were the toasted pecans I brought from my mini orchard. Yes, AHNC is going to be needed...these GOPers are angry and want to get even. Yay! More stuff to make fun of!

The Blind And The Dragon

Treasury Secretary Henry M. Paulson Jr. will urge China to maintain a strong currency during high-level talks this week as worries grow in the United States that Beijing may be exacerbating the global slowdown by deflating the value of the yuan to spur its own economy, Treasury officials said yesterday.

"Today was the big day for online shopping. This is known as Cyber Monday. Did you know that? And of course, tomorrow is Identity Theft Tuesday." --Jay Leno

The Bush administration finalized rules yesterday that will make it easier for mountaintop mining companies to dump their waste near rivers and streams, overhauling a 25-year-old prohibition that has sparked legal and regulatory battles for years.

"I didn't know you were good." -- Queen Elizabeth II praising Condoleezza Rice after a piano recital at Buckingham Palace Monday

There are two kinds of people, those who do the work and those who take the credit. Try to be in the first group; there is less competition there. - Indira Gandhi

THE LAST FUNDRAISER OF 2008

We passed the halfway point!

In this image released by the SportandNews agancy, Duncan Zuur of the Netherlands rides on a wakeboard through a flooded St. Marks square in Venice, Italy, Tuesday Dec. 2, 2008. The tidal surge peaked at 3 feet, 4 inches (102 centimeters), well below Monday's 5 foot, 1-inch level (156 centimeters), which marked the fourth highest tide in the city's recorded history and the worst since 1986. Still, the water Tuesday was high enough to flood the city's landmark St. Mark's Square and other low-lying areas. Photo/SportandNews