"It's been reported that outspoken anti-immigration anchor Lou Dobbs is leaving CNN. Yeah. True story, yeah. He'll be replaced by a guy named Juan, who will do the same job for $5 an hour." –Conan O'Brien

"Three young Americans have been charged with espionage in Iran after straying into the country while hiking in Iraq. Now, obviously, we all pray for their safe return. But hiking in Iraq? I mean — you know, if you're hiking in Iraq and Iran, you might want to get a you new travel agent. Okay?" –Jay Leno

A former CIA agent whose unmasking led to the conviction of former Vice President Dick Cheney's top aide lost an appeal on Thursday to declassify parts of her memoir.

"CBS News is reporting that President Obama has decided to send 40,000 more troops to Afghanistan. Obama says it's all part of his plan to finally deliver on the campaign promises made by John McCain" –Jimmy Fallon

"Congressman John Boehner told a crowd of protesters yesterday that the new health care bill was the 'greatest threat to freedom he's ever seen.' And then the Taliban was like, 'Uh, helloooo? What?!'" –Jimmy Fallon

"The other day in Wisconsin, Sarah Palin gave a speech, and the crowd was searched to make sure there were no cameras. That's right. Yeah, according to experts, Palin subscribes to the primitive belief that cameras will 'steal her crazy.'" –Conan O'Brien

"Former Miss California, Carrie Prejean, got into trouble for making a sex tape. She’s the only one in the tape. But I think this could be innocent too — last time for the racy photos, she said the wind blew her vest open . . . so maybe the wind blew her into some sexy positions and made her do some sexy gestures." –Craig Ferguson

"Remember the Congressman, William Jefferson, who the F.B.I. caught with $90,000 in bribe money in his freezer? Well, he was convicted of 11 counts of bribery and corruption. Prosecutors asked for the harshest prison sentence ever handed down for a member of Congress. Something like 30 years. The Congressman is saying — he said he still did nothing wrong. He claims he just fell in with the wrong crowd — Congress." –Jay Leno

Carrie Prejean is in the news again. She’s the beauty pageant contestant who spoke out against gay marriage. She’s a very family-values-oriented woman who, in her spare time, made a pornographic video tape. She says it is not a sex tape because she’s the only one in it. It’s s solo sex tape. It’s the first female solo sex tape . . . she flies solo. She’s like the Amelia Earhart of the naked. She's trying to downplay the incident. In pageant terms, it was a swim-suit competition minus the swim suit but with a lot of baton twirling." –Jimmy Kimmel

"NASA's been on a campaign to ease people's fears about the end of the world in 2012. Does anybody really think this is going to happen? No, this true. NASA announced that the movie '2012' is fiction and the Mayan calendar is wrong. And there is no mystery planet headed towards Earth that's gonna destroy it. People believe this stuff. They say the only thing that can really destroy the planet by 2012 would be, I guess, Countrywide Mortgage, AIG, and Wall Street." –Jay Leno

"Google has announced that they’re going to give free Internet access in airports all across the country. It’s fantastic! Up until now, the only way to see something pornographic at an airport was to follow a senator into the bathroom." –Craig Ferguson 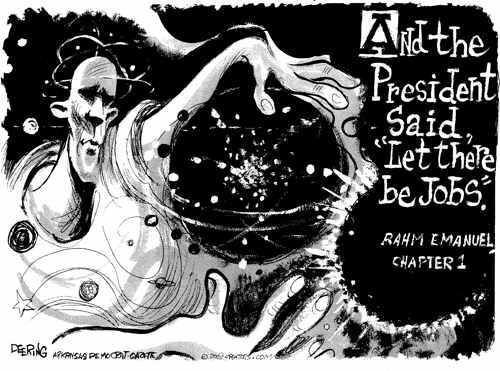 In this Wednesday, Nov. 11, 2009 photo, wrecker driver Gilbert Harrison, with MCH Towing, attaches a towing cable to a Bugatti Veyron that was driven into the water near Omega Bay in La Marque, Texas. A man blamed a low-flying pelican and a dropped cell phone for his veering his million-dollar sports car off a road and into a salt marsh near Galveston. Photo/The Galveston County Daily News, Chris Paschenko