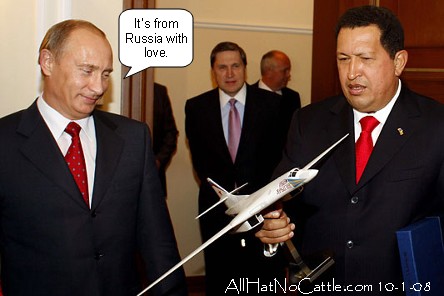 Speaking of bailouts: why don't we bail the hell out of Iraq? - Grant Gerver 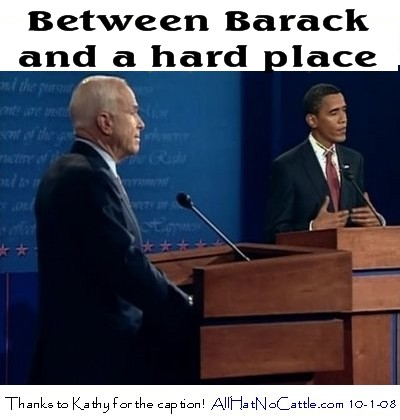 The AP found cigarettes, bull semen, military apparel and a grab-bag of other U.S. goods including musical instruments and brassieres went Iran's way during that period in addition to medical supplies, corn and soybeans. The exports were sent under agricultural, medical and humanitarian exemptions to U.S. sanctions on Iran. The Bush administration has declined to say who is getting the export licenses.

A candidate for president should not be judged by the color of his skin. And to - and to anyone who thinks differently, I say, please do not reject John McCain just because he's white. I think the recent news from Wall Street has made us all less tolerant, and only reinforced the stereotype that white people are shiftless, thieving welfare queens. - Bill Maher

Obama strongly supports the bailout proposal as it was rejected yesterday…. You don’t seem to ever mention that…

Hi Alex, Many links I ran included Obama's support for the bailout. Here's another link from a speech he made yesterday in Reno, NV --->  Obama urges 10,000 in Reno to support bailout plan

My cartoons yesterday reflect what 80-90% of what Americans feel---they just don't trust politicians with the handling of billions of dollars!

An Ode To Crybaby Republicans
By Madeleine Begun Kane

They are patriots first, they proclaim,
But when action’s a must they hurl blame,
Rushing out to condemn
“Hurtful” words from a Dem.
They treat critical bills like a game.

Subject: Is Sarah Palin for real?

Hi Lisa! John McCain's people wanted to trump Barrack Obama by picking
a woman as his v.p., and Sarah Palin was the best they could dredge
up? She actually claimed that living next door to Russia and Canada
automatically gives her foreign policy experience. I suppose if she lived
in Florida next door to Cape Kennedy, that would make her a rocket
scientist. :->

Have a great Fall!

Hi Eric, Thanks for writing!

Sarah Palin, one 72 year old heartbeat away from the presidency.

"Sarah Palin actually watched the debates very closely. Actually she watched with one eye the debate and the other eye across on Russia, because you never know." --Jay Leno 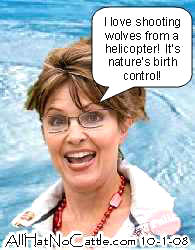 These are not the typical wolves of political ads — not the menaces depicted by George W. Bush in 2004 or John McCain just a couple of weeks ago. These animals are bloodied, gruesome victims.

As depicted in a Defenders of Wildlife Action Fund ad, they are Sarah Palin's prey. The commercial denounces, in graphic form, the aerial hunting of wolves in Alaska, a practice Palin, the Republican vice presidential nominee, has supported as the state's governor. 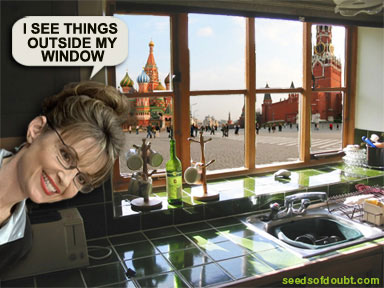 Gov. Sarah Palin cites vigilance against Russian warplanes coming into U.S. airspace over Alaska as one of her foreign policy credentials. But the U.S. military command in charge says that hasn't happened in her 21 months in office.

Am I the only American that is torn between the urge to laugh like mad and the need to cry in horror that a candidate for any Federal office can't name one Supreme Court case besides Roe v. Wade?

I'm trying to be generous and considering the circumstances I'm willing to overlook the fact that Caribou Barbie couldn't come up with old standards like Dredd Scott, Brown v. Board of Education, Plessey v. Ferguson and Marbury v. Madison; after all those decisions were all written pre-9/11 and they happened here in America, not in Alaska, where she's from. But shouldn't the Feminist Governor have Ledbetter v. Goodyear right there on the tip of her tongue? And wouldn't a sharp, engaged, politically aware Governor of ALASKA not only have knowledge of, but also an opinion on EXXON SHIPPING v. BAKER (the Exxon Valdez case) where all of that oil ended up in the waters off of Alaska (right there next to Russia), and decimated the COMMERCIAL FISHING industry, Todd's part-time job?

I'm begging you, talk me down from this ledge, PLEASE.

Palin is like a moose caught in the snow-machine's headlights and the McPalin campaign reminds me more and more of Katherine Harris' Senate campaign in '06 - Unspooling right before our eyes. It's getting hard to watch... but I manage, somehow.

Thank you for being a beacon of truth in these dark days.

Don't jump off the ledge! Keep the faith!

If Sarah Palin's interviews are any indication of how she "answers" questions, then let the debates begin.

It seems as though the more America sees McCain and Palin, the higher Obama goes in the polls.

Thanks for writing Danielle.

I want to warn people from Nigeria who might be watching our show, if you get any e-mails from Washington asking for money, it's a scam. Don't fall for it." --Jay Leno

"Today the House of Representatives voted against the Wall Street bailout plan, a plan which House Minority Leader John Boehner called 'a crap sandwich.' Yeah, that's what he said. Congress hasn't given up though. They're already working on a new plan which they call 'a crap sandwich with cheese.'" --Conan O'Brien 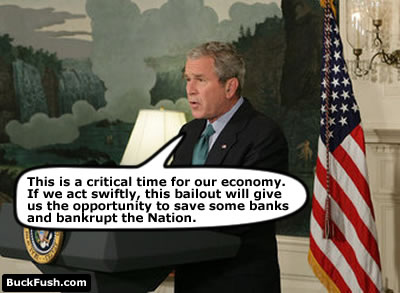 Today at CNBC, they said without a bailout, consumers wouldn’t be able to get credit cards at favorable rates. Oh, that takes some getting used to, huh? You mean they’ve been spoiling us with that low 30% interest?- Jay Leno

“This is a huge cow patty with a piece of marshmallow stuck in the middle of it and I am not going to eat that cow patty,” said Representative Paul Broun, Republican of Georgia.

Cheney is scrambling behind the scenes to broker a deal for Halliburton to take over Wall Street. 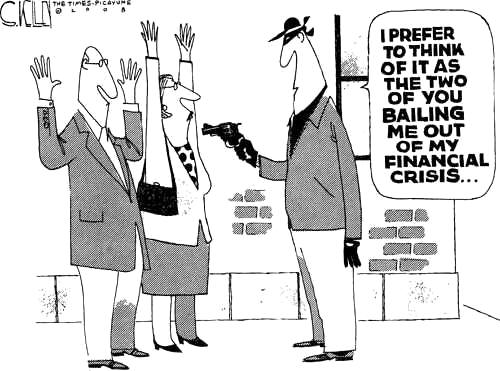