I wonder how many times Dubya will say 9-11 in his speech tonight?

"President Bush wants to put a man on the moon by 2015. Well forget about the moon, why don't we go to Afghanistan and find Osama bin Laden." —David Letterman

Bush Wants Spotlight with State of Union Speech
Reuters, United States -1-20-04
... While Bush's aides said the president's speech was not a political undertaking nor
a campaign event, the ... Last year Bush used the State of the Union ...

"President Bush said again today that he wants to send Americans back to the moon, then to Mars and then onward into space. Of course he realized that Americans don't have any more friends on earth." —Jay Leno 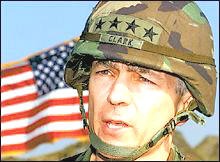 Clark Aims to Pull Rank on Kerry in New Hampshire
WJLA, DC - 1-20-04
Wesley Clark is aiming to pull rank on Sen ... the winner of the
Iowa caucuses, as the Democratic presidential race moves to New Hampshire ...

WASHINGTON - Government watchdogs are raising concerns about a potential conflict of interest for Justice Antonin Scalia  because he had dinner and went on a hunting trip with Dick Cheney while the Supreme Court was involved in a case about the vice president's energy task force...

"Am I the evil genius in the corner that nobody ever sees come out of his hole? It's a nice way to operate, actually." - The Dick Cheney click here for full article

"Conservative groups are demanding that President Bush support a constitutional amendment to ban gay marriage. They feel that when the founding fathers were putting the Constitution together they made a mistake by not outlawing it. Have you ever seen the paintings of the founding fathers? The powdered wigs, the frilly collars, the pedal pushers — I think they were for it." —Jay Leno

Seeing Steve Bradenton's cartoon of Laura Bush gives credence to the rumor that  Dubya is a guy with 2 belly buttons.

And that's with Viagra!

"It occurred to me that if the early Christians were half as annoying then as the Fundamentalists of Jerry Falwell's and Pat Robertson's ilk, than there's no great mystery as to why the Romans cheered for the lions." - Bob Witkowski  Click here for Bob's latest commentary on the Iowa caucus

If I had sent you the last two diatribes from your buddy
gjazspam, who wrote you the glowing piece you posted,
you'd better understand why I use earthlink.net for the folk
I don't want to have to worry about hearing from again.
Earthlink drops stuff like gjaz's material in the trash
and I don't have to read it unless I choose to.

I surely don't envy you having to read stuff like that
day in and day out. I don't know how you do it!

I have come to the conclusion there is just no hope
for people like him and the best thing we can do
is just hope the Democrats are able to take the
White House back in the upcoming election.

This country has a real problem!

What concerns me as much as the right-wing
talk-radio and tv hosts is the fact that
so many people listen to them!

I am thankful for people like you who are
willing to take the punishment and
show people what's going on.

Don't let 'em get you down!

Thanks for writing Alan. Rightwingers like him do not read, do not want to know facts, do not understand history and just get their jollies hurling insults.  He wrote me after I posted his email and insulted the color of my hair.  Hahahaha He's on my spam list for that insult!

He won't get me down, in fact he hardens my steely perspective of the right.

1- it honors a great person

2- it annoys bigots to no end

An angry audience member asked, "If you don't love this country, why don't you get out?"

Barry replied, "Because I don't want to be victimized by its foreign policy."

Saturn: Lord of the rings. (NASA/Hubble)